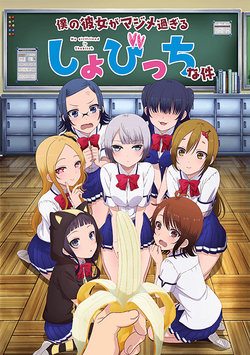 My Girlfriend is Shobitch (僕の彼女がマジメ過ぎる処女ビッチな件, Boku no Kanojo ga Majime Sugiru Shojo Bicchi na Ken?), produced by Diomedéa branch premiered on October 12, 2017. The anime is directed by Nobuyoshi Nagayama and is animated as a collaboration of Diomedéa and Studio Blanc.The scripts are written by Hideki Shirane and character designs are by Shōko Yasuda. Nippon Columbia produced the music.

With nothing left to lose, ordinary high school student Haruka Shinozaki confesses to beautiful, diligent class representative Akiho Kōsaka and to his surprise she accepts. Kōsaka takes dating as seriously as she does everything else, but does not quite get it. She pragmatically suggests activities that are too sexual.

Retrieved from "https://shobitch.fandom.com/wiki/Anime?oldid=187"
Community content is available under CC-BY-SA unless otherwise noted.